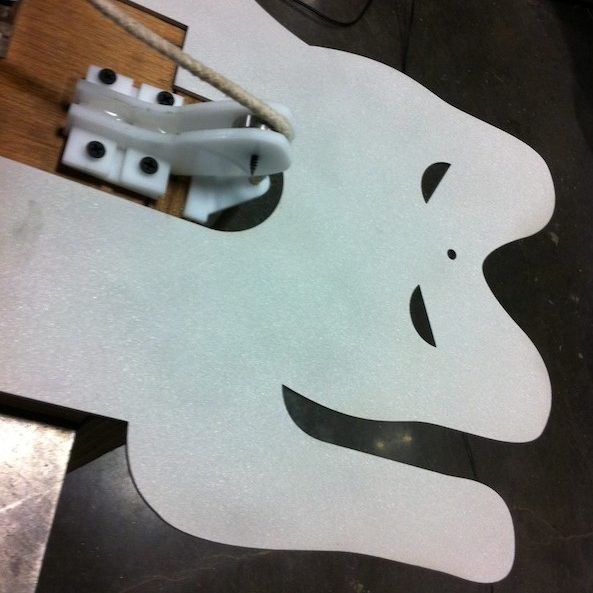 I love the paintings on old abandoned industrial buildings. You can almost tell the boundaries of the canvas – the silhouettes of the graffiti artists, leaning out of windows in the most ridiculous postures to reach further out to cover more area with their art. Penditti covers where even the bravest artists couldn’t reach.

Penditti is a machine. He sprays pictures. Unlike his alikes he only has one point of reference on the wall. But he is not alone. He has his cat by his side always who looks out for him so he doesn’t fall.

Penditti is a pendulum/swing essentially that has RGB spray attached to it’s end. Unlike other CNC plotters we don’t control any parameters, we just measure them. There are two Atmega32s serving as the cortex of Penditti. He escapes the cyber with the actuated sprays that spray on-demand when squeezed by servos and the reel on the top, where he hoists up the cans. He knows the length of the pendulum and the angle, thus he knows where he paints.
His neural network consists of two Xbees, which transmit the commands of the brain to the arm.

I used random Mahagoni-looking plywood as the base top to serve as the platform. On top there is Penditti’s cat – Behemót – sitting, made out of Aluminum. The swing/pendulum is fixed in two points, one connected to the reel, the other one fixed on the third eye of Behemót. The spray holder is made out of acrylic purely. It is interchangeable, so the cans can be rotated around fast. The cans are controlled by the second board which is connected to 3 servos that serve as artificial fingers.

As for electronics: I used three Towerbridge hobby servos – they are great, small, and high torque, SG-10 is their serial number. For the top big servo I used the giant CS-80 robot servo, which can easily pick up the spray can controller. To read the angle of the pendulum I used a simple linear potentiometer that was lying around TMG. I fastened a small wooden circle around the rope so it still has some room to play around but in general, I get a fast response when it is moving.